Our digital pedagogy project integrated AutoCAD, 3D printing, and Arduino technologies in courses for both physics pre-engineering majors and non-science majors. The central pedagogical approach was project-based learning using creative technology. Students were actively engaged in the design, construction, and testing of innovative products and solutions: Smartphone Sound Amplifier (RooBoost), a comfortable handle for cold 12-ounce aluminum cans (Can-dle), and an Infrared Touch Surface. This initial use of 3D Printing and Arduinos in our curriculum may serve as a precursor for a broader maker space at Austin College.

PHY 281, Statics and Engineering Design, was offered for the first time in Fall 2016. In this course, pre-engineering students designed a small bridge using AutoCAD software, built the bridge with popsicle sticks, and tested the prototype under physical stress and strain. This introductory design process prepared them for the main event: designing their own product to solve a real-world problem. Using an iterative design process, students modeled their product in AutoCAD and produced prototypes using the Ultimaker 2+ 3D printer.

Students showcased their designs to the campus community in a Demo Day at the end of the semester.   Their products— RooBoost, Can-dle, KangaBroo, and The Sauce Boss—were highlighted in the Austin College Digital Pedagogy blog post “Roo Products: 3D Design and Printing in Pre-Engineering Physics.” They also shared their products recently at the Austin College Scholarship Conference. 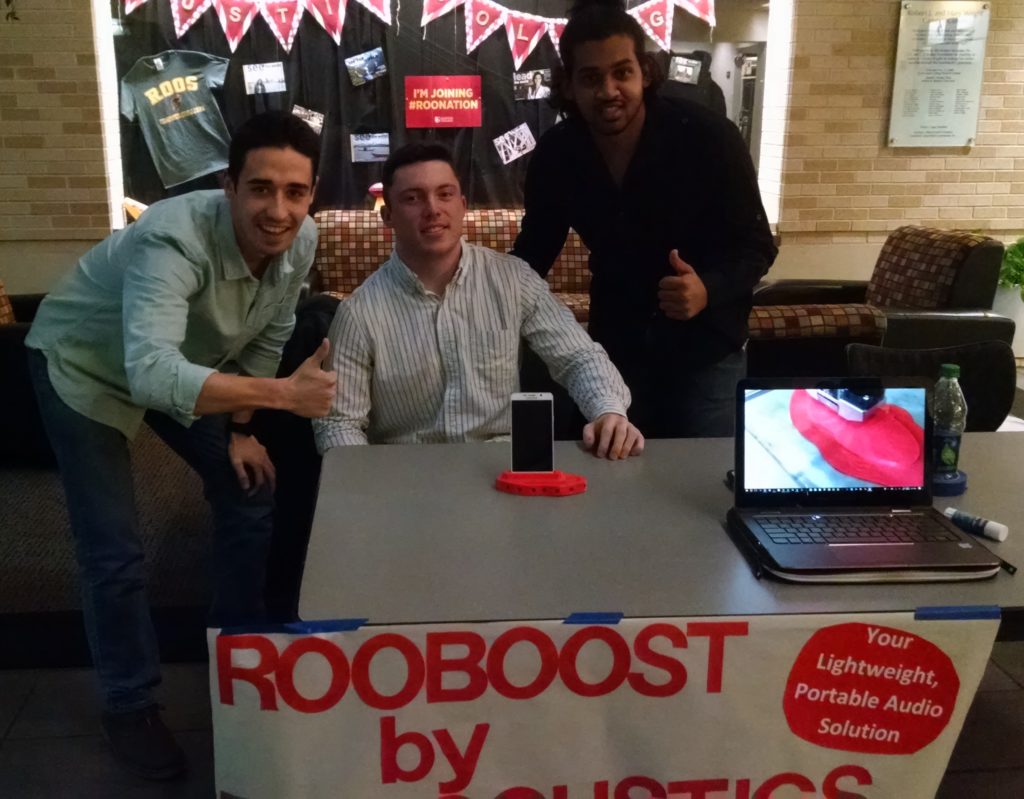 This course helps fill a void in our pre-engineering program: a need for authentic, meaningful engineering design applications. Roughly one third of our physics majors pursue a career in engineering. Although many of our physics courses have an applied focus, Statics and Engineering Design is the first course at Austin College to be designed specifically for engineers.

Inventions with Arduino for Non-Science Majors

In the Jan Term course Arduino Microcontrollers, non-science major students used the C++ computer language to program Arduino microcontrollers. An Arduino consists of a programmable circuit board (called a microcontroller) and software that runs on an external computer that is used to control the microcontroller. The circuit board can interact with other electronic circuits and make LEDs light up, motors turn, piezo motors buzz, LCDs display text, and so on.

No prior experience was necessary. The January term students built eight projects involving Arduinos and demonstrated them to visitors outside the Austin College cafeteria in late January. The projects were highlighted in our recent blog post, “Physics and Fun in JanTerm.” 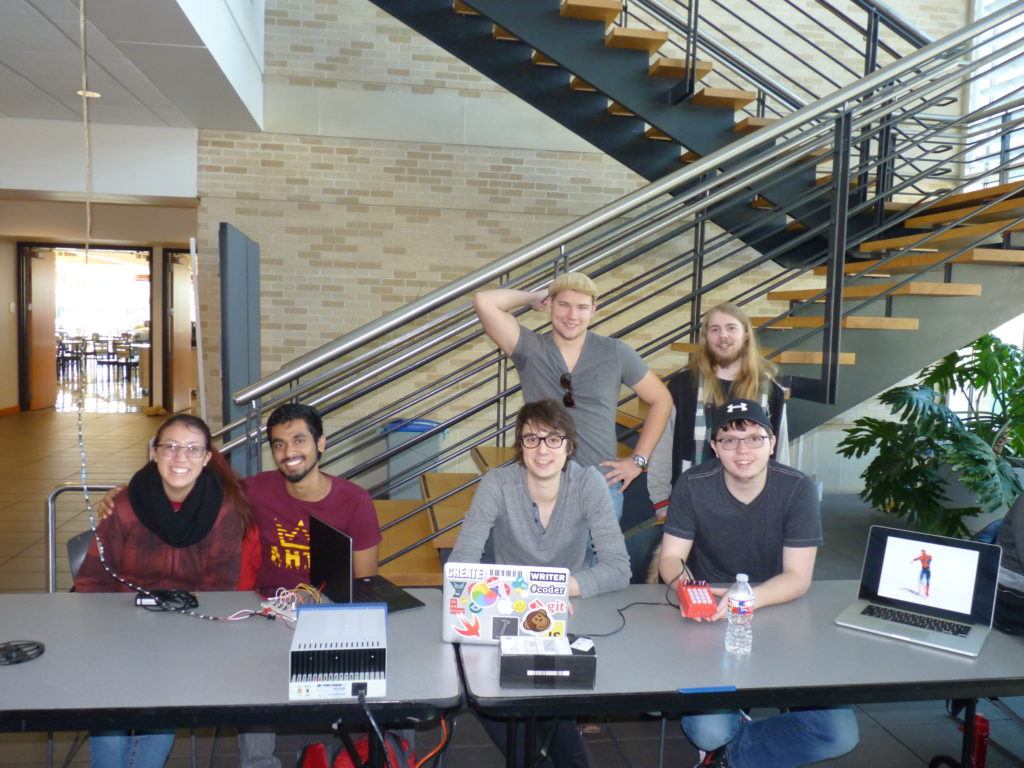 By teaching Arduino Microcontrollers this Jan Term, we were able to see where a similar regular-semester course may fit into our future offerings. The students had a variety of backgrounds: computer science majors who had programming experience, physics majors who were familiar with electrical circuits, and students with a general interest in Arduinos. Working in teams, they were able to take advantage of their complementary skills. We plan to incorporate Arduino activities in our PHY 230 Electronics course (an elective for majors and minors). Some computer science students showed an interest in taking Electronics in the future. A separate course for non-science majors will still need to be made available, perhaps in Jan Term.

Implementation of these technologies in the classroom—along with an inquiry-based pedagogical approach in which students can pursue their own interests—has reinforced for us the need for a maker space at Austin College. Maker spaces at other universities often include CAD software, 3D printers, and Arduino labs. Our pilot study here could serve as the springboard for a future maker space on campus.

For example, two of the three students that invented the RooBoost have continued their product design in an Austin College course called Product Lab. In this entrepreneurial course, students are learning how to pitch their idea, raise money through crowdfunding, and launch their product rapidly. Our engineering students would not have taken advantage of the Product Lab opportunity without the Statics and Engineering Design experience. The availability of AutoCAD and 3D Printing opened new doors for them.

A campus-wide maker space would provide exciting opportunities for even more of our students. We envision a space in which students, regardless of major, could design and innovate. Perhaps they have already taken a course in a specific area such as engineering, art, or computer science. Or perhaps students have developed an idea on their own, completely outside of the normal curriculum. Recently, computer science students have expressed an interest in developing a robotics club. The maker space would allow them to tap into their inventive spirit.

Twenty students answered the call and set out to learn and have fun. The students had a variety of backgrounds: computer science majors with programming experience, physics majors familiar with electrical circuits, and students with a general interest in Arduinos. They worked in teams that benefited from their various skills.

The January term students built eight cool projects involving Arduinos and demonstrated them to visitors outside the Austin College cafeteria in late January.  Hopefully their projects will inspire you to try your own! 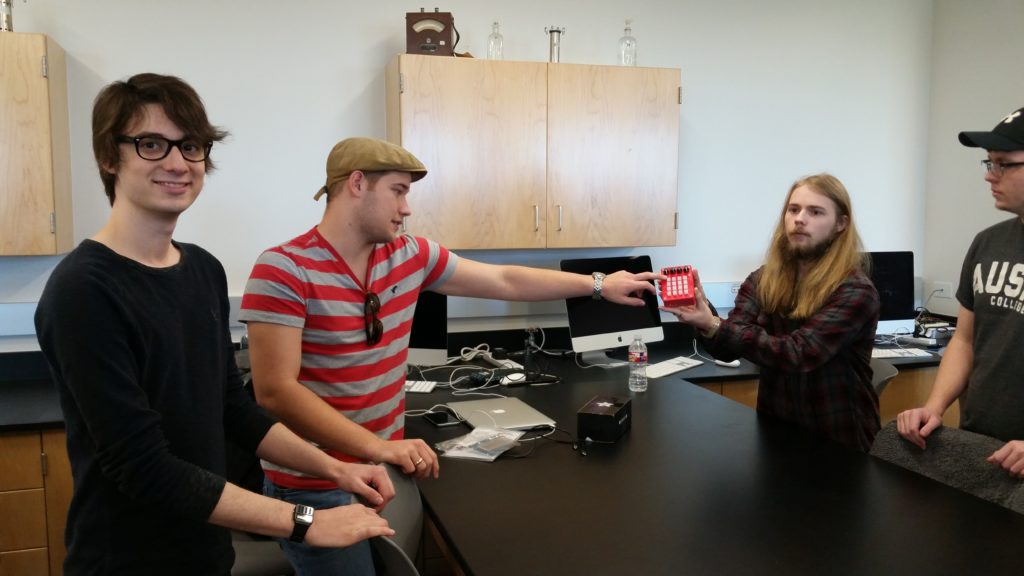 The MIDI (Musical Instrument Digital Interface) controller generates musical sounds that mimic a variety of instruments. The casing was built with an Ultimaker 2+ 3D printer. This project needed a lot of work and expertise; luckily this group of students were the right ones for this rather involved project; they got it to work and demonstrated its features by controlling the lights on their classmates’ project, “Sound Detecting LEDs. 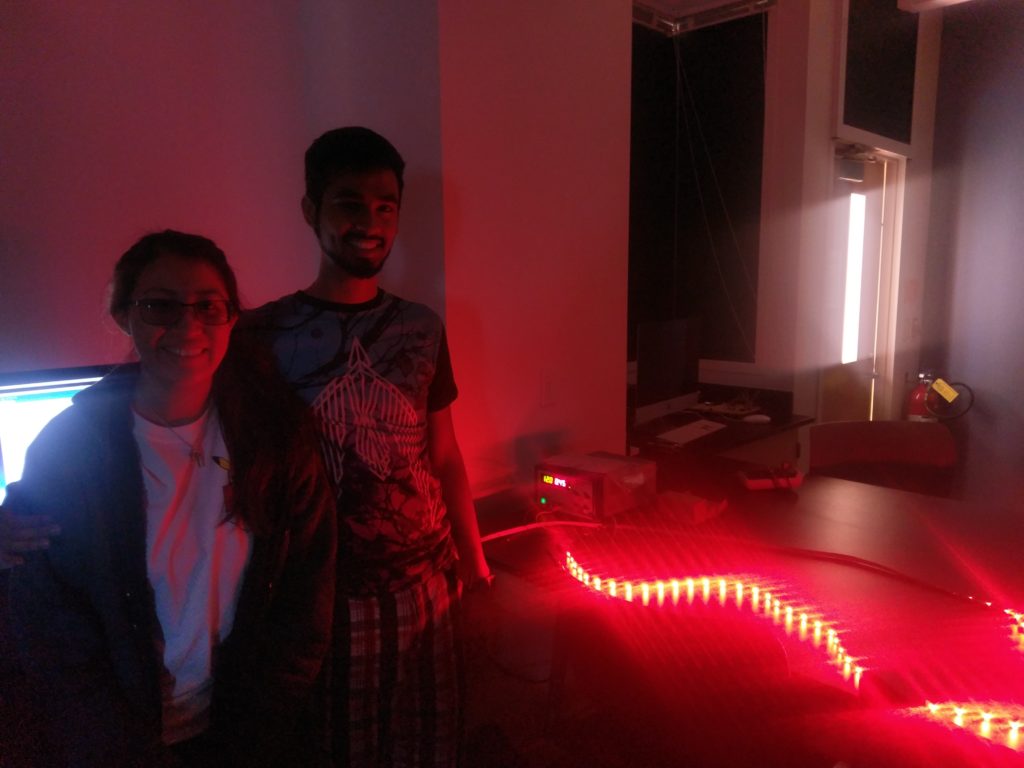 Aaron must be the best brother ever!  For his project he wanted to build a set of LED lights that his sister can use in her room.  Aaron and Karla built a sound-reactive LED animation. They used a sound impact sensor (similar in function to a microphone) which listens to ambient sounds and detects sound pressure and changes the animation of the 5-m long LED color strip. 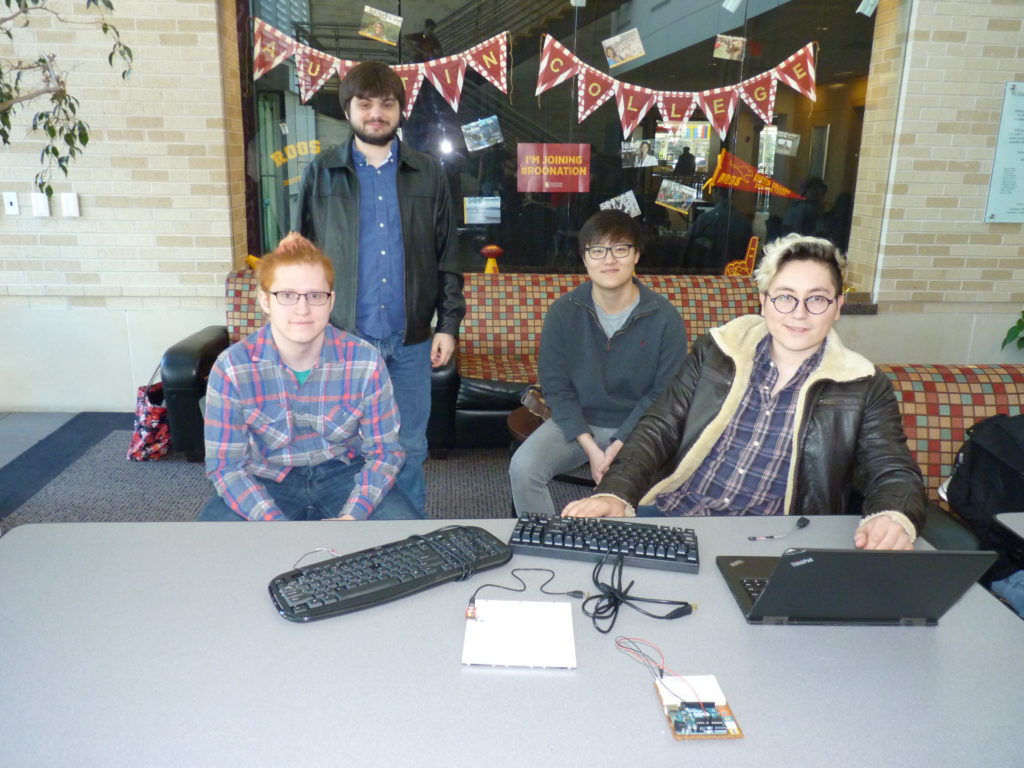 Building a wireless keyboard seems the perfect idea for a group of gamers, so they’ve set up to do just so.  A variety of keyboards were brought in and dissected, and the perfect solution is yet to be found (it turns out that one can either buy expensive keyboards that are wireless, or make one’s own, which requires some expensive software is needed). 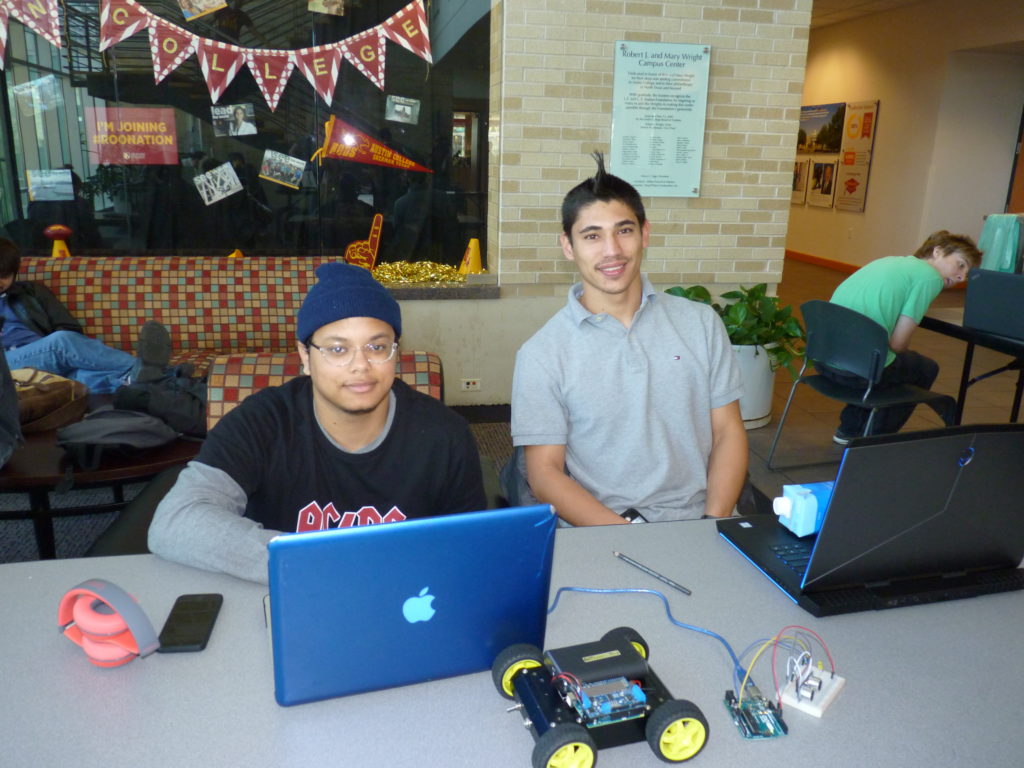 These students wanted to learn and play, so their project involved building a remotely controlled rover. The rover can be controlled easily with a smart phone via an app and we had some fun in the lab watching it go! Each wheel is controlled separately by its own motor (which we learned the hard way that can burn out when over-used!) 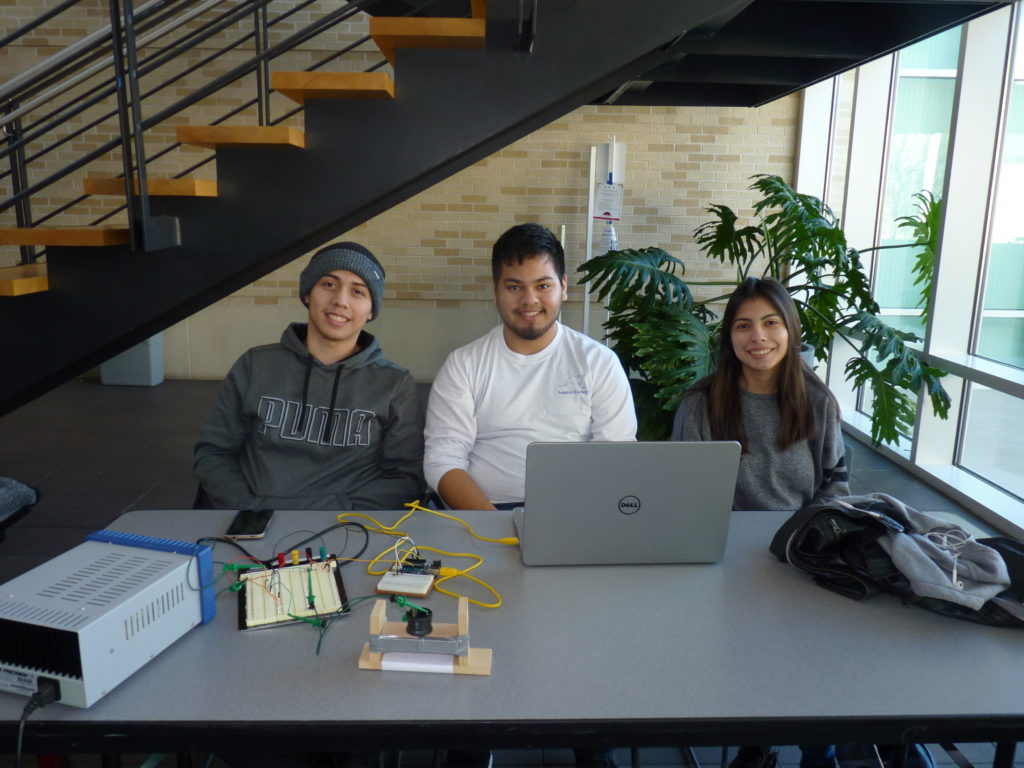 Bringing together physics and computer science majors will spark an idea for a computer-controlled levitating system! This group used an electromagnet and a magnetic field sensor to detect and control the position of a magnet in mid-air.  A sophisticated code generated a magnetic force strong enough to balance gravity! 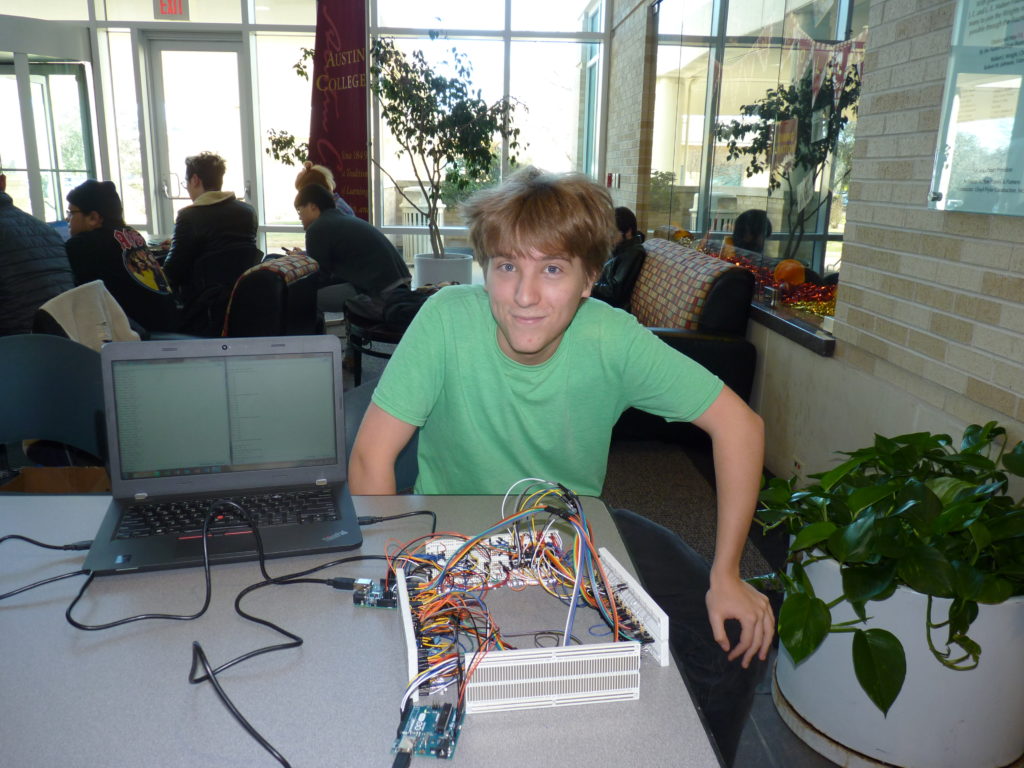 This aspiring physicist decided to build an Infrared (IR) touch surface. Rows of transmitting IR LEDs generate infrared light and rows of IR receivers detect the light. An object located between the rows will block some of the light, and an algorithm can pinpoint the location of the object. Kyle worked tirelessly on this project, even when it seemed impossible to keep track of all the wires involved! 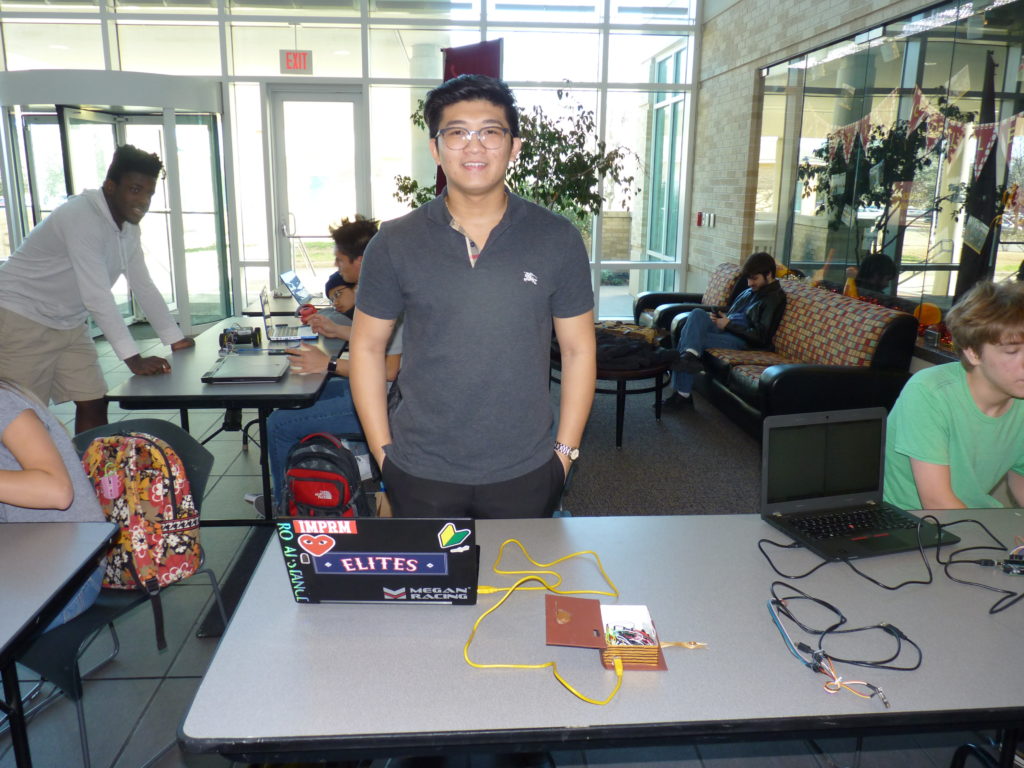 Johnny had initially a different project in mind, but after some unfortunate events that led to the early death of several piezo-motors, he settled on a lock box. The box, which contained candy on demo day, will only open when the right knock is used.  Maybe it will be used on Halloween for dispensing candy, or Johnny will use this to control the lock to his dorm room to only let in his most trusted friends. 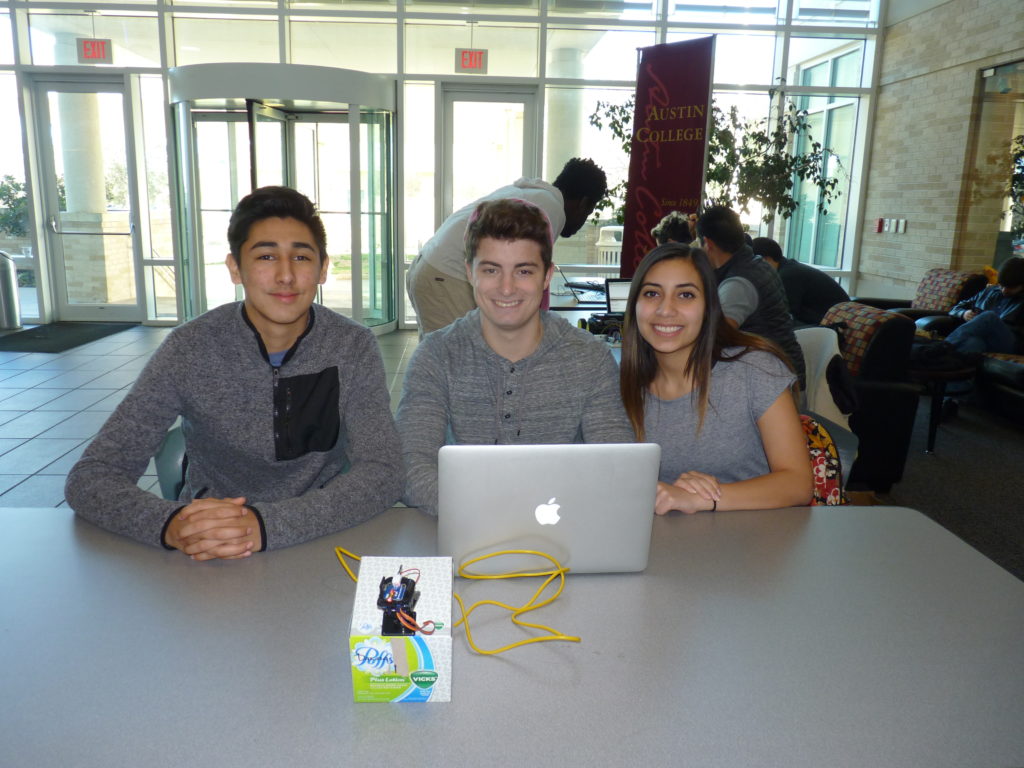 These students took a laser, mounted it to a stand controlled by two motors, and uploaded code that controls both the vertical and the horizontal motion of the laser. As a result, the laser moves in a plane and its light will change direction in a seemingly random way, amusing your cat for hours on end. The students have not yet patented their invention, but maybe they can be convinced to build a few more toys on demand!