“This class would be a lot less fun without Hypothes.is”
—–student comment about “A History of Anthropological Thought”

At the recent conference for Mellon Digital Pedagogy grantees at Austin College, Brian Watkins, Assistant Professor of Anthropology, presented his project on digital annotation in the anthropology classroom. In his update posted prior to the conference, Brian briefly described the project and reported a largely positive experience to date:

My project has been to implement digital annotation software (Hypothes.is) into my upper level course in anthropological theory. Though the semester is far from over, I can say that it’s going better than expected. For every day in class, I have assigned short and challenging texts by significant figures in the history of the discipline and which are relevant for my plan for that day. Using Hypothes.is, each student must make three annotations to those texts prior to class. After a few days of mostly linking certain concepts to wikipedia articles, the students have started to engage the texts and each other, and happily, it spills over into class.

I have been bringing some of those comments into class to provoke the same kind of discussion. I’ll say that I have never had a group of ten students go so deeply into discussion about Lewis Henry Morgan’s Ancient Society or Malinowski’s Kula text. The challenge in class so far has been to reign in the discussion and re-orient it toward the theoretical content. In the past, such discussions have generated only an unfocused smattering of commentary. Some early indicators:

Here are a couple of screenshots from Brian’s class that demonstrate annotation in action. The side panel toggles open and closed, while the annotated sections passages of the main text are highlighted (student names are redacted to preserve privacy): 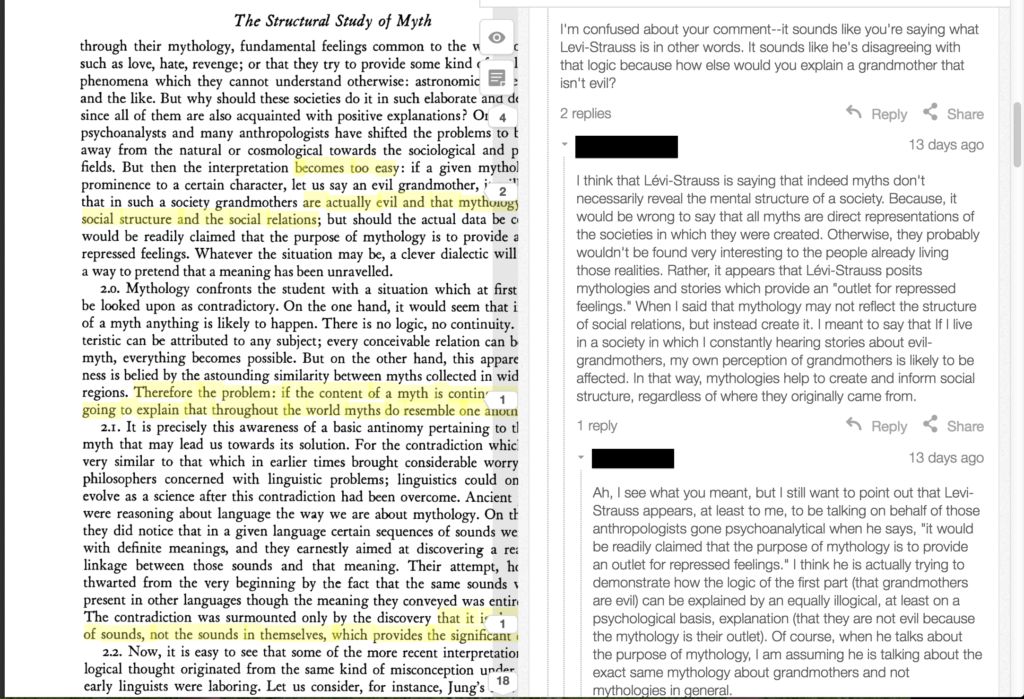 As the semester began, Brian provided students with a set of guidelines and instructions, explaining why students would be using social reading and annotation, and how to use the Hypothes.is platform. He did not provide specific prompts to which students should respond, but rather described in general terms the kind of substantive and constructive annotations–questions, commentary, responses, close reading, contextual references–that would be required. This gave students the latitude to develop various forms of engagement with the texts.

The annotations provided Brian with diagnostic information about student reading practices and modes of textual engagement. Students are making important connections among different authors and texts, and even among different disciplines. Questionable interpretations become opportunities for deeper analysis and discussion. Sometimes, the difficulty and challenge of a passage leads students to share their frustrations with one another. At other times, students adopt a playful attitude to the text, riffing on a passage with creative improvisation. Most importantly for this class, Brian is seeing evidence that students are making new insights into the world of anthropological theories.

Colleagues at the conference were intrigued by the project and proposed several interesting observations and questions. There is extra class prep work involved in reading the annotations, but it’s a relatively small class and the benefits seem well worth it. Brian does not grade the annotations as such, but does a weekly audit to check if the work has been done and sends reminders to those who still need to complete the requirements. There are in all twenty-two texts to be read and annotated, so there was some concern about the repetitiveness of the annotation task, although one person observed that this could be an advantage for the students as they gain practice and skill over the course of an entire semester. Another question was whether the next iteration of the class will read the annotations of this current group of students. The benefits of such a cross-semester collaboration would have to be weighed against the value of having the new group of students approach the texts in a fresh form without being influenced by previous comments and markups.

If you are interested in exploring how digital annotation with Hypothes.is could enhance your course, you can chat with Brian or me about the details of implementation.

1 thought on “Better Reading Through Annotating: An Anthropology Example”