At tomorrow’s Mellon Digital Pedagogy Workshop there will be several breakout sessions on themes shared among grantee projects. We’ll be blogging about those over the coming days and sharing insights and perspectives.

One of the shared themes is “collaborative digital annotation.” Several grantees, including Dan Dominick, Elena Olive’, and Kirk Everist, have projects in which students mark up and comment upon digital documents, including texts, images, audio, and video. What is that and why might you be interested? Actually, we did a presentation on this topic last fall at a Johnson Center luncheon, so I’ll reprise those remarks here to provide some background on the subject of annotation.

You are no doubt familiar with marking up things that we read in print form…underlining, highlighting, writing notes and comments in the margins of books and papers, or special symbols and doodles that signify something important about what we’ve read. This is nothing new…readers have been marking up texts ever since, well, there have been texts. For example, in this brief video classicist Gregory Nagy describes the annotation of manuscripts in the ancient era with notes (scholion) and marginal references (hypomnema):

After the emergence of print and the explosion of books in Europe in the early modern period, the practice of marginalia flourished as an art form. Literary historians tell us that the golden age of marginalia lasted from roughly 1700 to 1820, and that it was not unusual for people to mark up books for one another as gifts. The English poet and literary figure Samuel Taylor Coleridge (1772-1834) even published several volumes of his marginalia (and apparently coined the term itself).

More recently, the American author David Foster Wallace (1962-2008) was renowned for marking up books in his library. For example, here is an image from his copy of Don Delillo’s Ratner’s Star (click on image to make it larger): 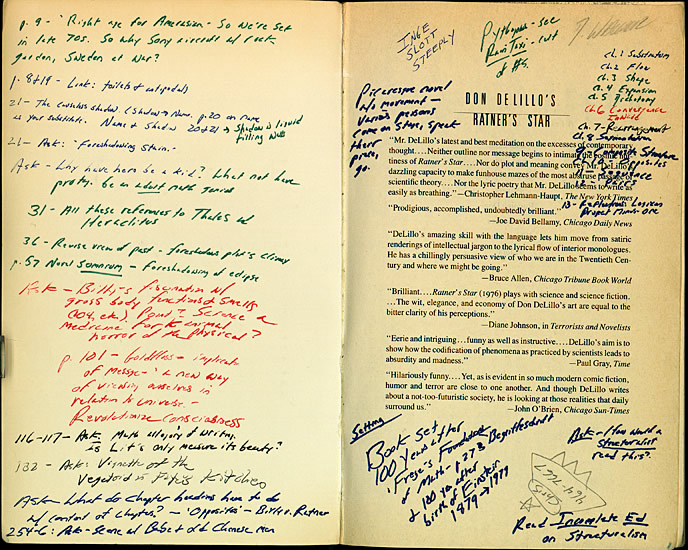 So the question is, are there ways to annotate these digitized documents in a way analogous to the marking up of books and manuscripts in the past? Can we make digital annotations in the context of the original document, using multiple forms of media, to which other readers, listeners. or viewers can respond, thus creating a dialogue or conversation? What we want is an arrangement in which the original content remains in the center of the online space, and comments, notes, and questions are connected to it at specific points…particular words, phrases, or sentences in a text, regions of an image, and timelines and frames of audio and video files. And this space should be a collaborative space in which scholars and students interact with one another’s annotations in the context of the original document.

The concept of collaborative annotation was actually part of the origin of the World Wide Web. Marc Andreessen, co-developer of Mosaic, the first graphical web browser, recently recalled what he was thinking back in the early ’90s:

Only a handful of people know that the big missing feature from the web browser – the feature that was supposed to be in from the start but didn’t make it – is the ability to annotate any page on the Internet with commentary and additional information.

Back in 1993, when Eric Bina and I were first building Mosaic, it seemed obvious to us that users would want to annotate all text on the web – our idea was that each web page would be a launchpad for insight and debate about its own contents. So we built a feature called “group annotations” right into the browser – and it worked great – all users could comment on any page and discussions quickly ensued. Unfortunately, our implementation at that time required a server to host all the annotations, and we didn’t have the time to properly build that server, which would obviously have had to scale to enormous size. And so we dropped the entire feature.

I often wonder how the Internet would have turned out differently if users had been able to annotate everything – to add new layers of knowledge to all knowledge, on and on, ad infinitum.

And Larry Page, the co-founder of Google, reflected back on the origin of the PageRank algorithm, the heart of Google’s search engine:

It wasn’t that we intended to build a search engine. We built a ranking system to deal with annotations. We wanted to annotate the web – build a system so that after you’d viewed a page you could click and see what smart comments other people had about it. But how do you decide who gets to annotate Yahoo? We needed to figure out how to choose which annotations people should look at, which meant that we needed to figure out which other sites contained comments we should classify as authoritative. Hence PageRank.

Over the last two decades, any number of annotation tools and platforms have been developed to try to realize this earlier vision of Andreessen and Page, with somewhat limited success. Projects such as Annotations at Harvard and the Hyperstudio Digital Humanities Lab at MIT are working to develop tools and standards for use in scholarly annotation projects. Some of the tools we have recommended and/or are looking at include:

Several faculty, including the grantees mentioned above, are experimenting with Classroom Salon, with promising results so far. They will be sharing their experiences here so that we can all learn from them. In addition, Brett and Mo are both users of Diigo to collect and annotate web-based content, so we’ll probably do a post on that at some point.

Finally, the W3C, the international body responsible for determine the protocols that make the Web work, has just established the W3C Web Annotation Working Group. Their goal is to develop a common set of standards for annotating on the web. According to the group,

Traditional annotations are marginalia, errata, and highlights in printed books, maps, picture, and other physical media. Web annotations are an attempt to recreate and extend that functionality as a new layer of interactivity and linking on top of the Web. It will allow anyone to annotate anything anywhere, be it a web page, an ebook, a video, an image, an audio stream, or data in raw or visualized form. Web annotations can be linked, shared between services, tracked back to their origins, searched and discovered, and stored wherever the author wishes; the vision is for a decentralized and open annotation infrastructure.

So we look forward to ongoing developments and improvements that will become available for us to enhance scholarship and the engagement of students with content of every kind.